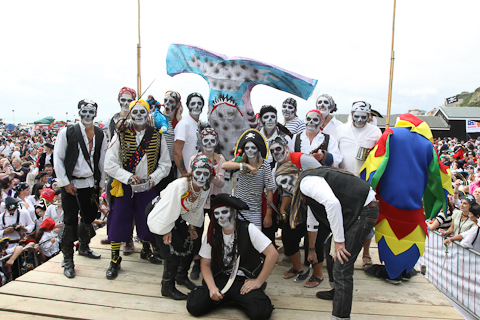 10am - Pirate entertainment throughout the day with Childrens entertainment to music in Butlers Gap, George Street 10.30am - Pirate music live and on stage, hog roast and Pirate ale throughout the day in Priory Meadow, Town Centre Helicopter pleasure flights from the East Hill, Old Town, all day. View Pirate Day from the air! See Hastings & St Leonards Observer on Friday 29th July for more details. 11am - Arrow FM Pirate roadshow at the Pirate Crazy Golf on the sea front 12.30 - muster on the beach near the Lifeboat House. Pirate Day this year will create, with your help, a spectacle which has never been seen before and will be an image which will forever be associated with Hastings. Last year we claimed the World Record, this year we create a World First. Thousands of pirates on the beach photographed and filmed from the air - forming a human skull and crossbones with Hastings underneath. Be part of this iconic image and again, this year, you can say 'I was there'! 1.30pm Captain Jack Sparrow, Will Turner and Barbosa arrive for explosive Pirate stunt action with Pirate fun and music on the Stade, Old Town 2pm - 'Beat to Quarters' massed drums call Pirates to the Stade, Old Town, for the biggest Pirate procession ever with drums, flags and....explosions!!! 3pm - Procession arrives at Priory Meadow, Town Centre, for swashbuckling and live entertainment 3.30pm - Procession heads back to the Old Town for more action and music on the Stade From 5pm - Piratical Barbecue at Hastings Motor Boat & Yacht Club, Rock a Nore. 8pm - Pirate Songs and Sea Shanties at the Stag, All Saints Street Photos from last year's event